All Glasses Designed For You

The optical line from Police was created after the sunglasses came out. The Police brand name is an expression of recognisability, of uniqueness, of the celebration of self. The emotion and culture of its time is a style to be followed and inevitably trendy. Police Frames is popular with the young, independent trendsetter with a rebellious flair. The eyewear is the epitome of cool.

Founded in 1983, Police initially started out making sunglasses. This was a time when sunglasses were not as commercially produced as they are today. Over the years the brand has endorsed a few celebrities in order to promote their collections including Italian footballer Paolo Madini, actors George Clooney, Antonio Banderas and British footballer David Beckham. Recently they collaborated with the Brazilian football star Neymar Jr. on his own collection of sunglasses which included a classy and enticing pictorial.

Police is an Italian manufacturer of designer fashion accessories that has specialised in sunglasses since its inception in 1983. The label's high reputation for the manufacture of police force-inspired shades of premium craftsmanship, and sleek yet rebellious aesthetics has seen the label also enter the prescription glasses market. Self-assured, professional men and women will love this collection of elegant, non-overt designer frames.

Make a statement with Police eyewear from JB Eyecare

This line of eyewear is subtle when it comes to branding: 'POLICE' simply appears down the arm of each frame, and/or to the top or bottom of the left lens. The use of superior metals and plastics, unique shaping, and opulent colouring makes the premium status of these rectangular and round glasses immediately obvious to all who see them.

If you were to use three words to summarise the style of Police sunglasses these may be distinctive, confident and dynamic. The classic police sunglasses designs always remain on trend as the brand keeps the look fresh by adding subtle modern twists with a unisex metropolitan vibe. In addition to being at the forefront of design, the brand ambassador this year being Neymar Jr and in previous years David Beckham and George Clooney are perfect examples of the type of person who would wear men’s Police sunglasses. For 2018, there are a selection of new men’s police sunglasses available such as the super slick and smart Police SPL161 sunglasses that offer a modern design.

About Police the brand

Police, the De Rigo Group's house brand, was launched in Italy in 1983 as unisex eyewear and a metropolitan manifesto for those who set out to get noticed. The name is no coincidence. It triggers the imagination and dreams, especially of the younger generations, and offers a whole new outlook, across the ocean and against the tide. The name evokes the American "on the road" lifestyle, but also the strong urban spirit of the city of all cities: New York. The Police attitude made its worldwide mark right from the outset, as an Italian brand with potent international overtones.

This alternative, nonconformist, almost irreverent brand immediately carved out a niche of its own. Building on its growing identity and positioning, over the years Police has reinvented itself, going from a simple eyewear brand to a veritable lifestyle benchmark. In this transformation, the brand extended to include a full range of fashion accessories - perfumes, watches, jewellery and leather goods - all with a strong personality, and representing a particular look and way of life. Young, authentic rebels, who follow the trends but seek to stand out with originality and flair, are thus irresistibly drawn to the Police "community".

The Police brand continues to ride above the fashions, without ever compromising its personality. This has been portrayed over the years by important Brand Ambassadors, such as Bruce Willis, George Clooney, David Beckham, Antonio Banderas and the football star, Neymar Jr, who have interpreted and voiced the POLICE values, style and world. The world we live in now and the idea itself of rebellion have changed, and the brand decided to aim, in a new voice, at the today's rebels: young people who want to make a mark on the world they live in through their choices and their desire to express themselves. They're the people who more than any other will influence the world we live in tomorrow and best represent the renewed spirit of Police.

Police products are now distributed in more than 80 countries across all major cities. Since 2008, the brand's retail strategy has focused mainly on the Middle East and China, alongside the opening of 40 shop-in-shops in the most important Department Stores. These shop-in-shops embody the quintessence of the Police lifestyle. They serve to reinforce the brand image and its metropolitan attitude whilst presenting a lifestyle as a whole.

Over the course of its history, the Police brand has been advertised by numerous celebrities, including Paolo Maldini, Bruce Willis, George Clooney, David Beckham, Neymar, Ji Chang-wook and Antonio Banderas.

The benefits of ordering Police glasses from JB Eyecare: 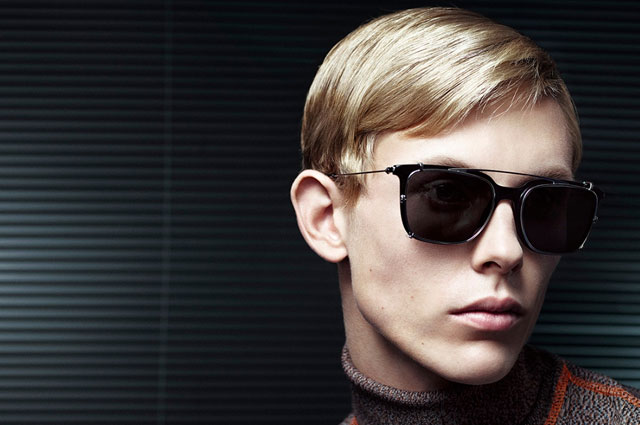 Prada glasses are among the most coloured, shiny and eccentric. They often anticipate and influence future tendencies: from sophisticated designs with precious details to vintage models proposed in in different, original nuances.